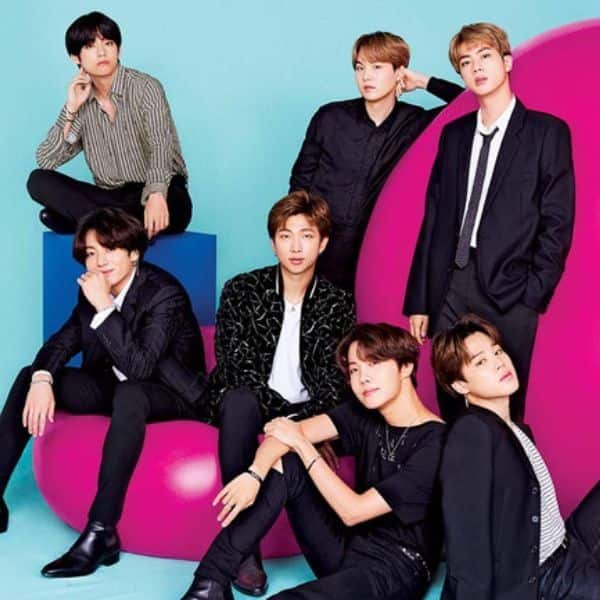 Fresh off their first mainstream Grammy nomination, K-pop sensation BTS says their hard work has finally paid off and they are one step closer to their childhood dream of a win at the world’s biggest music awards. Also Read – BTS: ‘We hope to visit India in the future,’ says Hyung Jin and we CANNOT wait

Their song “Dynamite” asks listeners to “keep your eye on the ball”, and BTS seems to have done just that with the best pop duo/group performance Grammy nomination announced on Tuesday night. Also Read – BTS’ V, Jimin, J-Hope, Suga, RM, Jin and Jung Kook share which of their songs define them

BTS is the first South Korean music group to be nominated for a Grammy Award in a prominent category.

Group leader RM told PTI in an email interaction that BTS is “truly honoured” by the recognition from Recording Academy, the institution behind the Grammys.

“We tremendously respect what director Bong Joon-ho achieved at the Oscars, and it was a very proud moment for us as South Korean artists. Similar to the Oscars, the Grammys are the most respected award in the music industry which we grew up watching to foster our dreams as musicians, said the 26-year-old, whose real name is Kim Nam-Joon.

“We’re truly honoured and happy about our very first nomination. It makes us even happier to know how delighted our fans must be right now. It feels like our hard work has finally paid off,” he added.

For the group, the full name is Bangtan Sonyeondan (Bulletproof Boy Scouts) or Beyond The Scene, their English branding — bagging a Grammy has been a longstanding “dream”, something they hope to realize with the win of “Dynamite”.

“Dynamite”, a funky disco number ushering in positivity amid the COVID-19 pandemic, is their first full-fledged English single and their career’s first Billboard Hot 100 No 1 hit.

The song will compete with “Un Dia”, “Intentions”, “Rain On Me” and “Exile” at the January 31 ceremony. They were previously up for an obscure best recording package Grammy in 2019 for ‘Love Yourself: Tear’.

“We’re thrilled to be even closer to our childhood dream. Since we’re nominated, we hope this leads to a win. We’ll prove ourselves on the Grammy stage,” said j-Hope, whose real name is Jung Ho-Seok.

BTS was poised for a world tour to promote their album Map of the Soul: 7 earlier this year but it had to be canceled due to the pandemic. They have used the time to be in regular touch with the ARMY, a term for their fans, sending their healing touch through online concerts.

V said their greatest wish at this point is for the pandemic situation to pass so that they can finally meet fans all over the world again in person.

“We have not been to India yet, so we look forward to having a concert and performing there if we get a chance in the future,” the 24-year-old, whose real name is Kim Tae-Hyung, promised.

Last week, BTS released BE, their new album and most personal work. It is yet another important addition in their discography characterised by themes of aspiration, hope, relatability and togetherness through hits like “ON”, “Black Swan”, “DNA”, and “Boy With Luv”.

BE comes in a year when the septet completes seven years of their debut. It is also special because it is a project on which all members participated actively, Jimin, 25, said.

While V turned visual director and Jimin served as project manager for the album, Jungkook directed the music video for the lead single, “Life Goes On”.

The production process of BE reflects the thoughts and emotions the members feel in the current situation, Jimin said.

“This album is also our message of healing to the world that is going through a difficult time at the moment. We hope that the listeners can find comfort through our music while listening,” the singer, whose real name is Park ji-min, said.

The word ‘be’ has multiple connotations. Asked what it means to them, RM said one of the first words when you learn English grammar in Korea is the verb ‘be’.

” ‘Be’ can have an infinite number of meanings and forms depending on what word comes before or after. I think our new album can be the starting point for us to explore endless possibilities as well,” he said.

For Jin, Be means to exist.

“I think it can translate into the fact that we haven’t seen our fans in person for more than a year, yet we’re still here,” the 27-year-old, whose real name is Kim Seok-jin, said.

Jung Kook, 23, said the album’s title holds a “hopeful meaning” for him. “It’s always used when you want ‘to be something’ and I always want to be a great person for ARMY,” the youngest member, whose real name is Jeon Jung-kook, added.

Jimin said the word ‘be’ reminds him of the results and aspirations that he has gained after many experiences, “which make me stronger”.

“I think ‘be’ is a word that best expresses myself at the moment. I’m thrilled that the album is released. I’m undeniably ‘BE’TS,” quipped j-hope, true to his sunny personality. V believes to be is a point of preparation to start something.

“That could be having a peace of mind or the complete opposite,” he added. Suga, 27, whose real name is Min Yoon-gi, said the meaning of ‘be’ signifies “my future that I will welcome with a smile”.

With three rappers in RM, Suga and j-hope and four singers, the band is the manifestation of unity in diversity – not just as singing styles, but also as individuals who have evolved over the years.

Asked what makes the group, Jin said the band’s greatest strength is the effort they make to convey the messages they want to deliver to the world “candidly and boldly”.

“We believe that there is no stronger medium than music, which can embody messages of hope, comfort, joy and so on. We’re thankful that we are capable of doing so with music and performance,” he added.

Like Korean films and dramas, Korean music too has been there since time immemorial, but the world has just started recognising South Korea as a culture at large.

Asked what could be the contributing factors to the rising international interest in the country, Jung Kook said, “We believe South Korean culture is very beautiful and attractive, which is portrayed through diverse contents such as movies, dramas, music, etc. As artists representing South Korea, we also want to share this with the rest of the world.”

This Parineeti Chopra Led Thriller Shouldn’t Have Missed The ‘Theatrical…