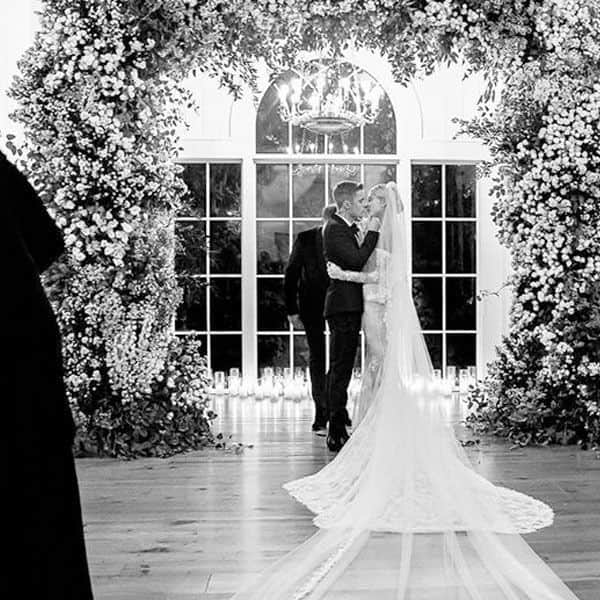 Justin Bieber and Hailey Baldwin are celebrating their first wedding anniversary today. We still cannot believe the fact that these two are married even though it’s been a year. It still feels all like a dream, which they are currently living. Justin and Hailey took to their social media handles to wish each other. Their wishes were sooo full of love that we were left gushing over their posts. Also Read – Justin and Hailey Bieber have the most beautiful wishes for each other on their first wedding anniversary — view posts

Justin Bieber took to his Instagram handle and shared a wide shot of them both standing at the alter just after they were pronounced man and wife. It’s a black-n-white photo but full of emotions and memories that they created on their special day. “Hailey Bieber. I am so lucky to be YOUR husband! You teach me so much everyday and make me such a better man! I am committed for the rest of our lives to empower you to be the woman God has called you to be! My heart is to enable you to achieve all of your wildest dreams! I promise to always put you first, to lead with patience and kindness!! Happy anniversary my beautiful sweet girl,” the Baby hitmaker wished his model-wifey. Check out his post here: Also Read – Justin Beiber files defamation case against two Twitter users who accused him of sexual assualt

On the other hand, Hailey Baldwin shared a series of pictures from their wedding, all monochrome, but so gorgeous. She wished to relive those moments all over again and we couldn’t agree more. “1 year ago we had the best wedding. Wish I could live this day over and over,” she captioned her post. Check out her pictures-post here: Also Read – Justin Bieber dismisses sexual assault allegations; plans to take legal action against the accuser

Aren’t they adorable? We think so too. Talking about their love story, Justin and Hailey knew each other since they were teenagers. However, they began dating in 2014. They had parted ways for some time before getting back together. They rekindled their romance to the level that they decided on forever and got married. It was a secret wedding and nobody knew about their D-day plans until they released pictures from their wedding on social media, shocking everyone. After a quiet wedding in New York, they hosted a grand wedding ceremony last year in October.

‘A Quiet Place 2’ Release Date Pushed Up To May 18

X-Men Isn’t the Title of the MCU’s First Mutants Movie?

As BTS’ Jimin and Kim Taehyung get congratulated for their graduation; here is…